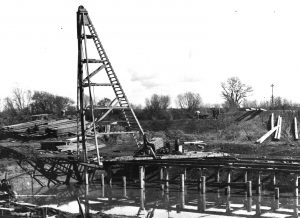 This district was built with funds from district assessments, $2,900,000 to date, over $2,000,000 of which was spent in the 1920’s. Since the closing of the west levee in 1921 the District has achieved its designed goal of land reclamation and flood protection. Reclamation District #999 has never been flooded. The current staff hopes to continue with this fine tradition.

Located at the district headquarters, the old, large pumps still pump 60% of the drainage water volume (nearly 180,000 gprn). From the very beginning, drainage of seepage and surplus water were serious engineering problems. These pumps were built by a local inventor and engineering genius, Byron Jackson*, and his pump company of Woodland. Cast in the San Francisco foundry in 1915, these pumps were initially slated for the Netherlands but couldn’t be shipped due to WW I, the Reclamation District #999 purchased them in 1917 and hooked them up to used motors (bought in 1915 from Portland Santa Cruz Cement Company for $9,475) of 250,250 and 500 hp. The price of the pumps was $9,650 FOB San Francisco. It is interesting to note that these facilities were put in without the aid of a transit truck, hydraulic jack, or powered crane but the knowledge of the block and tackle, the roller and the principle of the lever (not unlike the Egyptians).

Increasing the flood protection, in 1991 Reclamation District #999 added four more pumps which pump an additional 100,000 gpm. The District hopes to avoid interior flooding during the 100 year storm which some believe comes every 4 or 5 years. Under the Clean Water Bond Act of 1986, Reclamation District #999 installed an additional 100,000 gpm of pumping capacity for the purposes of Increased drainage and protection of the water quality within the district. Of interest is the significantly higher rainfall since 1955, when the Folsom Dam was installed (is there a relationship?). It is interesting that the design of the Central Valley Flood Control system, which starts in Redding and flows to the San Pablo Bay, has been able to handle all rainfall/flood run off since its inception in the late 1800’s, considering how little rainfall data (compared to geologic time) the design engineers had to work with (and no computer modelling).

*Also inventor of the Byron Jackson steam tractor, the Jackson fork which raised loose hay into the tops of barns, the ladder chain feeder for combines (called to this day the Jackson feeder)